Solar-Cells are semi-conductor devices with special properties which allow them to convert photonic energy into electric current.

In other words, photons striking the Solar Cell transfer energy to the cells electrons.

Is there more than one type of Solar Cell?
...Why, Yes there is!


There are two basic types of cells, namely, Crystalline and Thin Film Cells.

It's likely that you are quite familiar with crystalline Silicon Solar-Cells with their detailed structure, the characteristic blue colour and the many tiny wires which run across the front and back sides of the cell. One side is for the collection of electrons and the other is for the return of electrons.

How PV Cells are Made

Thin film cells are made of compounds such as, cadmium telluride (CdTe), copper-indium selenide (CIS), and gallium arsenide (GaAs).

Their thin profile makes them flexible and that can be a great advantage for manufactuers.

However, Thin Film Cells are less efficient than crystalline cells for exactly because they are so thin that photons are less likely to be absorbed into the surface.

One solution is to use multiple layers rather than a single one.

Each solar cell produces only a small amount of electricity. Enough to run a watch or a calculator.

So, in order to generate large amounts of power, solar cells will have to be grouped or "ganged" together in series (as you would with batteries) and power delivered to bus bars which in turn deliver the power as Direct current (DC) to two terminals; positive and negative.

A Solar inverter is used to convert Direct Current (DC) to AC or Alternating Current for you your household or commercial convenience. 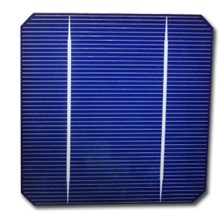 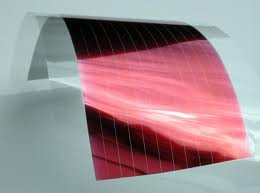 Above,
Solar-inverters convert direct Current into Aternating current for household use.

If you are planning on generating your own electricity for home or office use, you will need to investigate inverters